indiecater achieves what appears to be a near perfect score, well 8/10 is pretty nifty don’t ya think? from the newly revamped and now fully nationwide Analogue Magazine.

An ecstatic in-depth review from Tim at Tenacious T that culminates in â€˜a good compilation is like sex and by god this one proves that point – the foreplay, the action and the sated yet yearning for more feeling at the end. God give me a cigarette now!â€™.

Album review which has comments on all 10 tracks from Pretending To Be Japanese.

From the high priest of self-depreciation Matt Vinyl “a very diverse and wonderful range of music”.

The Egocentric lads had this to say about indiecater “a compilation of underground music that’s just too damned good to remain underground”.

Jared from one of our favourite blogs 5 Acts had really nice things to say “I love it! And the best part: not one single track here is a letdown”.

Danish Blogger Hits In The Car says “Now this could be very, very interesting!” in relation to indiecater.

mp3hugger was interviewed on Phantom FM on 29th July 2008 about the indiecater compilation, you can listen to some of it here hugger on phantom

Asleep On The Compost Heap
The Bringer Of Song
The Devil Has The Best Tuna
Fabulist!
The Indie Hour
Indie Limerick
Keep Hope Inside
Largehearted Boy
Nialler9
Ohmpark
Pascal’s Country Sounds
See What You Hear 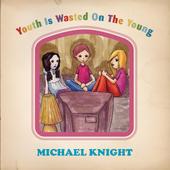 Dublin collective Michael Knight released their debut with a minimum of fanfare. They also appeared out of the blue from a country that is adept at uncovering troubadours yet has a slightly anaemic record in producing exciting new bands. That may be about to change, however, if Michael Knight achieve what their music ultimately deserves. With a Clap Your Hands Say Yeah net savvy they could soon be the sensations of the underground because hidden inside their shiny armoury are bundles of sonic joy. There are justifiable Belle & Sebastian comparisons but their influences also span the several degrees of separation between the Beach Boys and Burt Bacharach. With such a varied game plan it seems entirely appropriate that they decided to call themselves after a 1980â€™s TV character. What the bright red shorts wearing, million record selling crooner thinks of it all is another matter altogether.

Itâ€™s that early Belle & Sebastian energetic quirkiness that hits you first. â€˜Waves To The Shoreâ€™ is a superb piece of affecting kitsch with attendant vintage keyboards, Richard Murphyâ€™s warm vocals and glorious background harmonies from Edel Coffey and Lynn Millar. The piece is perfectly off-kilter yet exuberantly innocent. The bands most successful efforts are based around a lavish chorus where the boy/girl interplay is perfectly executed. â€˜Leaving Townâ€™ is a ravishing example; the piano interlude at the beginning barely reveals the sweetness about to be unveiled. There is a childrenâ€™s daytime programme feel about the way Murphy delivers his lines, one half jolly the other fabulously silly. Thatâ€™s not to detract from the joy of it but itâ€™s only when the trio combine to furnish a multi-layered chorus that the magic occurs. The result is otherworldly, completely timeless, effortlessly dispatched yet utterly compelling. This is a certifiable modern day classic. The title track is almost as good, for once Patrick Freyne takes over the lead and his near santa like voice provides the perfectly foil to the gentle ahhâ€™s of Richard and the girls. The music that sits in the foreground is playful, understated and the tinkling piano is the only thing that steals the limelight from the singers.

The quality is evenly spread throughout the album but some tracks take a bit more time to reveal themselves. â€˜Bright Eyeâ€™ showboats quirky structures and unveils offbeat melody at every turn so itâ€™s easy to overlook it initially. By letting it mature slowly, however, it grows into a multi-faceted pop entity. â€˜The Lights Go On And Offâ€™ is frenetic and as dispassionate as the record gets. Murphy pulls a note perfect Stuart Murdoch impression while the guitars sound like they have just returned from an enjoyable eastern escapade. â€˜Lead Me Downâ€™ is a lot gentler, the piano sounds comfortably familiar, the strumming is campfire friendly and the tiered vocals gel so seamlessly together you may find yourself singing along in an unrehearsed shower moment. â€˜Crown Of Thornsâ€™ has a Wilsonesque feel to it and even finds time to include a whistling solo into proceedings. What takes this fine debut out of the classic category is the presence of a couple of disappointing numbers. If they had been culled then weâ€™d be looking at one of the most flawless introductions since Tigermilk. â€˜Success!â€™ is inexplicably dour and out of sync with the rest of the happy go lucky fare. The vocals are tired, off key and the instrumentation would suit the moment the funeral cortege enters the graveyard. â€˜No Second Bestâ€™ is slightly better yet slight nonetheless. Perhaps it could work ok as a b-side but it struggles to find any meaning throughout its stunted life. But, disappointments are certainly in the minority and a couple of seconds in the company of tracks like â€˜Seasonsâ€™ draws a colourful crayon smile in your psyche. â€˜Foalsâ€™ was the albums first single and is perfectly pitched indie folk that you can dance to. If Arthur Lee had had Richard Murphyâ€™s voice this perfect ditty would have made it onto the â€˜Forever Changesâ€™ masterpiece without much ado. The guitars even have a country twang that is semi Morricone in nature.

In some ways â€˜I Did It Biffâ€™s Wayâ€™ is an altogether separate direction for the band but as a closing track thereâ€™s no denying its genius in capping a marvellous record. It reminds most of something that the underrated Swedish band South Ambulance can conjure. Right from the off the pulsating riffs set the momentum with Murphyâ€™s vocal riding the entourage with graceful dexterity. You can picture the end of gig antics as the band decide its time to ditch the balanced harmonies in favour of a sublime feast of chugging noise. This is indie rock at its most ebullient and its greatest achievement is the way it reveals hidden nuances with repeated listens. The circular disposition is shattered toward the end when the roof blows to reveal the sun, moon and the stars. Michael Knight are quite likely the most essential thing to come out of Ireland since Damien Rice decided America was for him. Up to now their sales likely only run into the thousands but if there is justice Murphy et al will need to look for extra wall space to accommodate lots of round platinum things. â€˜Youth Is Wasted On The Youngâ€™ is the only musical kitt youâ€™ll need for your home, portable or, of course, your car stereo.

You can now buy the remastered ‘The Language of Everyday Life’ from Indiecater!

Signed to the imperious Dead Elvis label, In Motion left a small yet indelible impression on the local Dublin scene with their one and only album ‘The Language Of Everyday Life’. The production was raw at best, decidedly creaky at worst, yet the abiding feeling of joyfulness on listening to this album of technicolor melodies is one to savour repeatedly. In Motion first appeared out of the blue on â€˜No Discoâ€™, Irelandâ€™s much loved but sadly defunct foray into alternative music. The scattered images of â€˜Hollow Blowâ€™ portraying an ordinary ramble though Dublin City Centre were soundtracked by a haze of fuzzy guitars and a rollercoaster collage of mouth-watering vocals. Imagine standing in the Gobi in the midst of a snowfall; the effect is mesmerising, emotional even.

â€˜The Language Of Everyday Lifeâ€™ is in essence a distillation of the jangle pop genre, where the chords lightly shimmer in unison with vocals that effortlessly spin pretty patterns. â€˜Until My Dreams Come Trueâ€™ is the stunning opener where the rampaging guitars melt into the sucrose vocals. The seamless playing is orchestrated by lyrics as unsullied as â€˜In the corner of your heart, is there a place I can hide?â€™ Alan Kelly applies such integrity to his singing youâ€™ll likely retreat to your cuff at every available opportunity. â€˜Splitting The Seamsâ€™ and â€˜Honey Sweet Soulâ€™ sit side by side on a wave of Slowdive machinations. The pace is close to static, the chopping guitars resembling waves on a calm day. Why bother with that whales sound cassette when artificiality is as good as this, who needs a soother when you have the aural equivalent?

The second part of the album is where In Motionâ€™s inner fireworks finally ignite. â€˜Hollow Blowâ€™ is machine gun pop with gum drops for bullets. â€˜In Daylightâ€™ is possessed by frenetic jangling guitars while Liam Ryan (Drums) keeps them in line. In an album of aerobatic vocals the swooping volleys by Kelly are heart wrenching. The albums soul comes in the form of â€˜Five And Twenty Thousand Daysâ€™. The bass bumble (John Duff), the chugging riffs, the affecting singing and the heavenly trumpet as 20th century Scaramouche create an intoxicating mix so that by the time â€˜Filterâ€™ appears your heart will have already surrendered. And what a way to say goodbye. Right down to the gorgeous synth foray this is the sound of a broken heart saying goodbye. And at just 30 minutes this will be one of the shortest yet most enduring relationships you will ever have with a collection of songs.

â€˜The Language Of Everyday Life â€˜is not a conventional album. Only 1,000 copies were ever shipped from the Dead Elvisâ€™ offices. The production values alone make it sound like a demo recorded in a damp garage. It would be easy to dismiss but the ideas and warmth are of a band so special it is upsetting to realise that the world never even noticed. The only other release of note from the band was the â€˜For An Eveningâ€™s Velvet Endingâ€™ single (Mucksavage Records) which included â€˜Hollow Blowâ€™. In Motion members are still making music in projects as diverse as electronic Decal (Alan Oâ€™Boyle) and slowcore The Last Post (Alan Kelly). Whether either can ever reach such sonic heights is doubtful but having a pop sphere like â€˜The Language Of Everyday Lifeâ€™ in their back catalogue must be as comforting as a particularly downy duvet set. Seek this album out with the intensity of a mislaid winning lottery ticket.