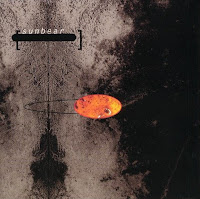 This is our second reissue and this time it comes from an act much closer to home. Back in the mid-90’s Sunbear were touted as future kings but in the end it all came to naught. Wasn’t for the lack of quality output however as their debut album remains an incandescent example of a young band pulling out all the stops to dramatise what was buzzing around their heads. ‘Sunbear’ was a remarkable achievement that pushed the boundaries in an already vibrant indie scene in Dublin at the time. Sadly a miniscule marketing budget didn’t help and despite numerous replays of ‘Notebook’ on RTE’s seminal ‘No Disco’ programme ‘Sunbear’ faded from view. Of course the boys from Sunbear went on to form the very much alive and thriving Ruby Tailights so who are we to rule out a one-off ‘Sunbear’ extravaganza. Many thanks to Paddy and Martin for their efforts in making the reissue of this important record possible. The album is selling for €3.50.

To give ‘Sunbear’ some context the band’s vocalist Martin Kelly has kindly pieced the story of the album together for us.

“Well, way back in 1993 Sunbear made its first attempt at playing a couple of songs live in front of a somewhat bemused audience. Lyrics weren’t the problem, as I never saw the necessity to write too many of them in one song, but singing was a major issue! I never wanted to be a singer (I still don’t actually!), but we all gave it a go and it was decided that I would take the role and try my best to weave my mumblings somewhere between the distortion of all our crap instruments. The only reason being our uncontrollable desire to be in a band and play really loud music.

As well as smothering our ears in My Bloody Valentine, Sonic Youth, Dinosaur Jr, Swervedriver and Pale Saints amongst others, we were all so influenced and impressed by the amazing bands that played, what seemed like, every weekend in Dublin at that time (In Motion, The Idiots, Luggage, The Mexican Pets, Pet lamb). After a while we were lucky enough to share gigs with all of them.

We also played a lot with Whipping boy, and in time started to pull quite a few punters into the support gigs we were playing. It was all very shambolic if I remember correctly! Someone said once that the reason they liked seeing us live was our unpredictability – things could go to shit at any point and swing to a moment of sonic bliss the next. I’m not even sure if we ever really enjoyed it as we were never happy with the gigs and I seem to remember lots of arguments and drunken stupidity!

So after a year or so hauling our gear to every venue in the city, and playing as many gigs a week as we could, we decided to record an album. It was a kinda spur of the moment thing in a way. A conversation with Og Crudden, from Dead Elvis records, who were just about to put out the In Motion album “The language of everyday life” planted the seed in our minds. Dead Elvis were working with Marc Carolan, who was the main engineer and producer in a basement Studio in Parnell Street called Fuse. It had an 8 track machine and a live room and was producing some really great records, despite its impoverished surroundings, like the In Motion album and the Wormhole album. So we all saved £200 or so each (which was fucking hard seeing as myself and Moss were struggling in really shit paying jobs at the time!) and paid for a week in the studio & 1000 copies of the album. And away we went!

I think we set out to be as unconventional as we could (It doesn’t seem that way listening to it now I think) and wanted lots of mood and little interesting bits all over the place. I think we took things quite seriously. Marc was really great with us! We had done hardly any recording at that stage so he brought the ideas to life for us. We wanted all out fuzz-distortion on some songs and clear dream-pop melodies on others, and I think we got that. And I think all the influences are there, but I hope we still kept a feeling of originality. “Resin” and “Things to do” are fairly obvious indie rockers, but we loved loads of different kinds of music, so “Centre Page” was a really nice way to show that. It started out as a real dreamy sound-scape with delayed guitars and then Marc came in and started layering up sounds and we just kept going with it. The computer voice still sounds great even though people always say that we ripped off Radiohead! (They didn’t do it for another 3 years or so – Fuckers!!…only messing!)

The idea of having the two parts on the album (Opening notes and Closed book) came from our real want to bring out vinyl! But that never happened.

Anyway, nearly 15 years on we still love the album, and in a weird “not up our own ass” way, we’re all really proud of it. It’s a really lovely thing to think that other people do too! MP3Hugger has given us a great opportunity to get it to some fresh listeners. There were not huge numbers the first time around, maybe it can become an epidemic this time! It’s a strange little album with lots of flaws and production short-comings (Not Marc’s fault – we just didn’t have the fancy ass stuff folks have today!), but if you can look past these you might just get it….There’s 30 minutes of traffic noise at the end if you don’t!”

Listen to Sunbear in its entirety!

‘One album that’s never mentioned in any top Irish albums of all time is without doubt one of the greatest. Way back in the early 90s a young Dublin band called Sunbear recorded a stunning debut album’

‘Sunbear is an album of exhilarating but mysterious guitar music’

‘Sunbear have managed to create an enlightened, playful and powerful record’